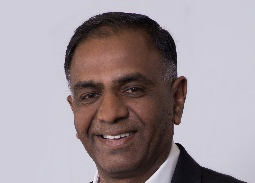 Girish holds MSc (Electrical Engineering) and MBA degrees from the University of Cape Town, with broad experience with the city of Cape Town and Eskom between 1999 and 2000. He started his career at Airports Company South Africa in 2000 as Maintenance and Engineering Manager at Cape Town International Airport; in 2012 he progressed to the airport’s Assistant General Manager for Airport Operations.

During his tenure as Assistant General Manager at Cape Town International Airport, he was responsible for the facilitation and operationalization of the infrastructure expansion ahead of the 2010 FIFA World Cup event as well as the successful facilitation of the passengers and delegations through the airport. He was also the lead member of the Airports Company South Africa team deployed in Brazil as the Operations Director for Guarulhos International Airport in Sao Paulo, where the team did an excellent job under his leadership.

This position is critical in ensuring a strategically-led design process in technical services and solutions, ensuring a seamless transition and integration of existing and potential designed capabilities to support the organization’s sustainability going into the future. Following 15 years of vast experience with the company, Girish was appointed Group Executive: Technical Services and Solutions on 1 May 2015.