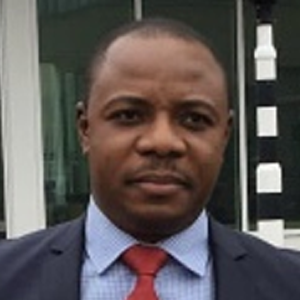 Gabriel Tanimu Aduda, Permanent Secretary Political and Economic Affairs Office and Chairman National Authority on Chemical & Biological Weapons Convention (NAC&BWC), Office of the Secretary to the Government of the Federation, has cross cutting experience in management, administration and consulting with, wide ranging involvement in government and non-governmental sectors. Until August 2017, He was the Director Civil Service Transformation Department, in the Office of the Head of the Civil Service of the Federation, where he also served as the Chairman; Public Private Partnership Consultative Forum Service Wide 2016-2017. The 3PUCF is a forum initiated by the OHCSF and ICRC to provide a stakeholder engagement platform to accelerate knowledge and experience sharing among key PPP personnel in the Ministries Departments and Agencies of Government. In February 2019, he convened a High-Level Retreat of key senior public and private sector stakeholders, to harmonize a wide range of issues bothering on effective and swift delivery of public-private partnerships in infrastructure delivery. The key objective of the Retreat was to deliver a roadmap for recalibrating the delivery of public-private partnerships for Nigeria’s infrastructure.

He had previously served as Director, Economic Research and Policy Management with the Federal Ministry of Finance and Head of Strategy and Reorientation at the Economic and Financial Crimes Commission (EFCC) amongst others.

His membership of High Level Committees include Office of the Head of the Civil Service of the Federation Champion, Presidential Initiative on Ease of Doing Business 2016; Member; Committee on Enterprise Culture and Commercial Orientation in Public Service 2016; Presidential Audit Committee of the Nigerian Export Supervision Scheme (2015); National Nuclear Energy Programme implementation Committee 2014 -2015; National Economic Management Team (NEMT) Sub-Committee on Port Reforms 2014 -2015 and Expert Group on Promoting the United Nations Convention Against Corruption (UNCAC) as a framework to Mainstream Anti-Corruption Safeguards for the Organization of Major Public Events in 2012 amongst others. He has several publications to his credit.